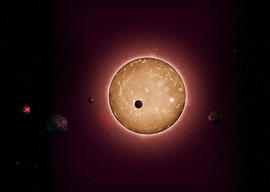 The number of stars in the universe is uncountable. The number of planets potentially even higher. Earth is just one small, pale blue dot orbiting a very average star. The probability that life is abundant in the universe should be high, yet we have located no undeniable signs of life beyond Earth.

This is what is known as Fermi’s Paradox. One hypothetical solution is the Great Filter, which proposes that the conditions required for the evolution of intelligent life are rare. According to the hypothesis, at some point during the evolution of life, a wall or filter prevents it from progressing any farther. There may, this hypothesis proposes, be life out there, but it stopped at the bacterial stage (for example).

Aditya Chopra and Charley Lineweaver, astrobiologists from the Australian National University propose a modification on this scenario. Most life, they say, would become extinct before it gets very far along the evolutionary process at all.

Their research has been published in the journal Astrobiology and can be downloaded here (PDF).

“The universe is probably filled with habitable planets, so many scientists think it should be teeming with aliens,” said lead author Chopra.

“Early life is fragile, so we believe it rarely evolves quickly enough to survive. Most early planetary environments are unstable. To produce a habitable planet, life forms need to regulate greenhouse gases such as water and carbon dioxide to keep surface temperatures stable.”

The hypothesis, which the team has called the Gaian Bottleneck, proposes that, while many planets may have good conditions for the emergence of life, at some point they become unsustainable. As an example, Venus, Earth and Mars may all have had similar conditions 4 billion years ago, when microbial life began to emerge on Earth.

At some point, perhaps up to around a billion years after that, Venus grew too hot to sustain life, and Mars lost its atmosphere and water. Any life that had emerged would have failed to adapt to the rapid changes and become extinct. But it’s a little more complex than that. Evidence shows that life on Earth was able to successfully emerge because life itself was making the planet habitable, such as the oxygenisation of the atmosphere caused by cyanobacteria photosynthesising.

To date, the Kepler mission has located some 1,039 confirmed candidate planets, those that meet the rough basic conditions for supporting life. They are rocky, like Earth, and orbit around their star in the Goldilocks zone, not so close that they’d be too hot, like Venus, and not so far that they’d be too cold. Life has yet to be observed on any of these planets. That does not mean it’s not there, but The Gaian Bottleneck hypothesis suggests that its presence is unlikely, that extraterrestrial global extinction level events are the norm, not the exception.

“The mystery of why we haven’t yet found signs of aliens may have less to do with the likelihood of the origin of life or intelligence and have more to do with the rarity of the rapid emergence of biological regulation of feedback cycles on planetary surfaces,” Chopra explained.

NASA believes that extraterrestrial life within the solar system, if there is any, is likely to be microbial. The space agency is looking to Jovian ice moon Europa, the crust of which conceals a vast ocean. If there are hydrothermal vents spewing heat deep beneath the ocean on Europa, there’s a chance microbial life has grown and propagated.

This general idea, co-author Lineweaver said, can be extrapolated throughout the universe in many different environments.

“One intriguing prediction of the Gaian Bottleneck model is that the vast majority of fossils in the universe will be from extinct microbial life, not from multicellular species such as dinosaurs or humanoids that take billions of years to evolve,” he said.