Myanmar opens its gate with many fascinating destinations which gave to me a burning passion to experience the magical beauty of this country. Despite the hot summer, I went to the legendary city of Bagan to start my travel in Myanmar to explore every corner of this fairy land.

To get to Bagan, I had to fly to Yangon or the Myanmar’s most crowded cities. Then, I spent 8h trip by local bus in direction to Bagan.

I arrived in Bagan when it was still dark, at about 4am. Without any hesitation, I paid quickly a horse carriage for a whole day tour to explore all the temples from the sunrise to sunset. Bagan was called in the past Pagan which was the capital of the Kingdom of Pagan from the 9th to 13th century but the most flourishing time of Bagan was from the 11th 13th century under the reign of King Anawrahta. More than 14,000 terracotta temples have collapsed after the historical events and the earthquake in 1975. Until now, there are just over 2,000 temples under the shadow of the Nim and Arabica trees having immense shade and fragrant smells like flowers. 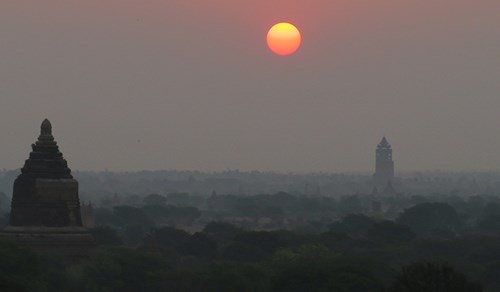 With so much desire to record stunning sunrise moments of the mysterious land of Bagan, I went immediately to the Shwesandaw temple. I climbed the steep stone steps with ardor to have an ideal location near the temple’s top. I was still in the dark but I was surprised to see many Western travelers who were there. Each of them has found a beautiful location towards the sun which was about to rise. They were ready to capture the sunrise in Bagan, a unique experience while travel in Myanmar. I had to find difficultly a position near many others professional photographers. The first rays of dawn gradually emerged from the horizon at 5h30. The dawn in Bagan is very different from other places, because it has the wild and mystery beauty. Bagan becomes the land of myth, more dim with thousands of large and small temples with cones – Bagan’s characteristic architecture style – appearing from distance to create extremely impressive scenery. So, a Japanese tourist used both pen and paper to redraw the Bagan’s sunrise, each tower, each trees… Indeed, Bagan’s dawn is as beautiful as a fairyland!

My horse carriage brought me to the most famous temple on a trail of red land. The Ananda Phaya temple is famous for its monumental architecture and the gigantic Buddha statue. The temple was built in stone in 1105 to symbolize the supreme infinite wisdom of the Buddha, with architecture in shape of cross. The center of the temple is a cube and on each side has a standing Buddha statue… Your travel Myanmar wouldn’t be perfect without visiting the Mahabodhi pagoda in Bagan. Its architecture is original from the Bodhgaya temple in India. Bodhgaya in India was devastated by the Turkish invasion troops and Myanmar sent a delegation of Bagan Buddhist and artisans to help to rebuild it. Then upon returning to Myanmar, these artisans built the Mahabodhi pagoda according to the prototype of Bodhigaya.

Mahabodhi has two floors, one is a podium and one is a tower floor. The podium has a large space to worship the Buddha. The difference compared to the other temples is that its door was gilded and was locked with a steel lock created only for the Queen of England. Around the temple, there are many small niches and each niche has a statue of Buddha with a total of 465 Buddha statues. The tower floor has four sides with hundreds of reliefs describing the Buddha’s life… I moved without feeling tired between different temples which are all sumptuous, magical…witnessing a Golden Age of Bagan. When the last rays of sun covered all roads and temples, I spent a night in the legendary Bagan before going to other destinations during my travel in Myanmar.