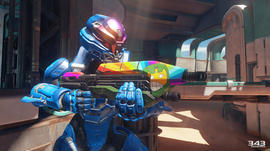 The new maps are Riptide (Arena) and Urban (Warzone Assault), while a Halo 2-era Battle Rifle is one of the featured Reqs; others include rare variants of the Carbine rifle as well as a new Achilles armor set.

A pair of new assassinations are also included with Infinity’s Armory. You can head to Halo Waypoint to see a complete breakdown of what’s coming to Halo 5 with the free update.

Are you going to jump back into Halo 5 to check out the Infinity’s Armory content? Let us know in the comments below!