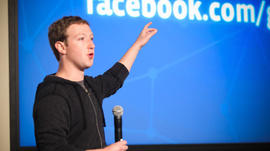 Facebook has rubbed India’s telecom regulator up the wrong way in its quest to provide free Internet.

The Telecom Regulatory Authority of India in a letter published on Tuesday accused the social media company of turning a public debate on Net neutrality “into a crudely majoritarian and orchestrated opinion poll.”

The TRAI in December began a new round of collecting public opinion on Net neutrality, a hot topic in the country. In response to this, the Menlo Park, California-based company started its Save Free Basics campaign, which encouraged its users to send emails through their Facebook accounts to the TRAI and voice their support of the service.

Free Basics is a pet project of CEO Mark Zuckerberg that brings limited Internet use to those who would otherwise not be able to afford it. Originally launched as Internet.org, the service is available in over 30 countries. Though it may seem like a gesture of good will on the part of Facebook, many have expressed concern that the project, by offering only select apps and services rather than the entire Internet, violates the principle of Net neutrality. TRAI, in late December, requested that Facebook halt Free Basics until it turned over more information about the terms of the program.

In its Tuesday letter, TRAI said it was concerned that the social network asked for support from its users without letting them known precisely what they’re responding to — a consultation form that TRAI had sent out to the public. Instead, Facebook’s Save Free Basics campaign provided users with a template message that touted the benefits of the service to send to TRAI. The telco watchdog called the template “tangential”, noting that it was largely irrelevant since the questions on its consultation form didn’t specifically revolve around Free Basics.

The letter also responded to a complaint from Facebook and cleared up something of a discrepancy — TRAI said it had received 1.8 million responses from Facebook users, but the Silicon Valley firm claimed over 16 million emails from its users had been sent. “We urge TRAI to acknowledge and consider all of the 16 million comments sent by people in support of Free Basics,” Facebook had written, adding that “all of them were sent to the correct email address in a timely fashion, but none were delivered as a result of the action taken to unsubscribe from delivery of Facebook emails.”

The TRAI acknowledged that emails from Facebook accounts “appeared” to be blocked from 17 December, but reversed the blame, saying, “If this were indeed the case, TRAI should have been informed immediately for appropriate steps to be taken…it is surprising that it took over 25 days for you to inform TRAI of this.”

It’s far from the first time Facebook has been criticised over the program, with a notable Save The Internet movement growing over the last year in India in response to Free Basics. More recently, dozens of Internet rights groups attacked Facebook for making “disingenuous” claims about opposition to the Free Basics plan while reasserting in an open letter that the service violates Net neutrality.

Zuckerberg responded in a piece for the Times of India last month, comparing limited Internet access to libraries and hospitals. “We have collections of free basic books. They’re called libraries. They don’t contain every book, but they still provide a world of good,” he wrote. “We have free basic healthcare. Public hospitals don’t offer every treatment, but they still save lives.”

With 132 million Facebook users, the company’s user base in India is second only to the US, which has 193 million monthly active users.