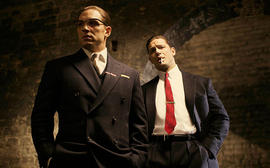 How did the creators of gangster film “Legend” pull off the feat of putting two powerhouse Hardy performances in the same film? With a pinch of CGI, the help of the star’s best mate, and some good old-fashioned movie trickery.

Veteran cinematographer Dick Pope was the man responsible for realising the two Toms. CNET talked to him about the 2015 movie, which was directed by Brian Helgeland and is available to buy or watch online now.

At the heart of the film, acclaimed British actor Hardy plays twin brothers Reggie and Ronnie Kray, notorious real-life gangsters who ruled the London underworld in the 1960s by killing and robbing, while also rubbing shoulders with celebrities in the nightclubs they owned. Although the film’s story could be more focused, Hardy is captivating — and justly award-winning — in the twin roles.

“I read the script as if it was going to be two actors playing Reggie and Ronnie,” said Pope. “It came as a huge surprise to me that they had signed Tom Hardy up to play both roles! From being a fairly straightforward narrative, it turned into an extremely technically challenging production.”

Here’s Hardy and Hardy in the film’s trailer:

While Hardy’s differing performances would create the characters, it was Pope’s responsibility as cinematographer to manage the technical aspects of the film. “The role of cinematographer is to take the script and then listen to the director’s vision for the film, then visualise that onto the screen as pictures,” he said. “It’s basically how the film is told in visual terms, and the actual operation of the camera. How the camera is moved, what equipment is needed to move the camera, whether it be still shots or very complicated tracking shots or Steadicam.

“That, married with the lighting that is used to tell the story emotionally, the colours, everything,” Pope said. “Whether it’s very dark or very bright or very contrasting. Connect with the audience through the mysterious lighting or bland lighting or cold lighting. It’s quite a number!”

While the technical challenges of having a single leading man playing two roles seem obvious, in fact the first task was a little more abstract. “The challenge was to naturally tell the story,” said Pope. “We had to show the story so it appeared to be two different actors, without drawing attention to the fact that it was the one actor playing both parts.”

That meant using familiar film language, such as shooting over one character’s shoulder or cutting between shots of two characters when they’re interacting, rather than jamming both into the same frame every time. “It’s very easy to be drawn into being excessive about putting both actors very cleverly and smugly into the same shot all the time,” said Pope, “whereas if you were telling the story with two actors, you’d never do that. You would just play it naturally without bundling them into the frame together nose-to-nose. We had to try not to be tricky, not to be too clever and not over-do it.”

Inevitably Ronnie and Reggie would have to be in many shots together. “You had to run the scene twice, once with Tom playing Ronnie and then again with Tom playing Reggie,” said Pope. You might expect a modern movie to do all the work with computer generated imagery and special effects, but in fact a lot of the heavy lifting was done with the classically old-school approach of simply having someone else standing in for Hardy with his back to the camera.

“Tom Hardy has this wonderful stand-in, called Jacob [Tomuri],” said Pope. “Jacob goes everywhere with Tom. He did ‘Mad Max’, he did ‘The Revenant’, he does everything Tom does. They travel together, they’re great friends. Jacob is always there for Tom. So when Jacob was standing in for Tom, for Reggie, say, Tom would talk to him about mannerisms. Where he would put his hands. If he was drinking, when to have a drink. If he was smoking, when to take a drag on the cigarette or the cigar.”

When Hardy and Tomuri were playing against each other, they would have to match the previous take once Hardy had swapped roles. “Tom has an earpiece, with the other take playing on it, so when he was playing Reggie he would have Ronnie’s dialogue in his ear with an earpiece. He could hear himself talking and then he would react to the way he’d played it as Ronnie.”

The lo-fi approach sometimes went even further. “If we couldn’t get the stand-in in there,” said Pope, “we’d put in a tennis ball on a stick that Tom would look at.” Take a look at this behind-the-scenes video for a glimpse of the filming process:

Despite being identical twins, the Krays were very different. The film plays up the differences between them to help distinguish between its fictional interpretations of the brothers: Ronnie Kray was the more unstable of the twins, played by Hardy as a jowly, hulking and emotionally fragile brute. Although equally violent, his brother Reggie Kray was more outwardly stable, and was played by Hardy as a suave romantic able to hide the darkness beneath his charming exterior.

Pope is full of praise for Hardy’s ability to transform between the two characters. He described Hardy as “Clever, very clever. To be able to go away and to be such a different person when he came back. He was so different he was like two different people.”

Each scene required thought as to the logistics of the transformation from one brother to another. “Who we would do first was the big question. We planned that much more than where we were going to put the camera. So if the scene was led by Ron, he would do Ron first. If the scene was led by Reggie, we’d do Reggie first. And then we’d turn Tom round, Reggie to Ron or vice versa, as quickly as we possibly could.”

The startling metamorphosis would happen in just an hour or so. “Whatever they did, they did it pretty quick. If he’d been off changing for a long time, we wouldn’t have made schedule.”

Other scenes called for more technological solutions. “We used a variety of different techniques,” said Pope, ranging from older methods like split-screen to more modern innovations such as CGI face replacement. That involved adding pasting Hardy’s face over Tomuri’s in post-production. “They would take from another scene, or whatever, and they would carve Tom out. It didn’t happen very much. Or we would zoom in a bit, in post[-production], to make it more blurry in the foreground.”

Pope used every trick in the book to highlight the differences between the volatile Ronnie and the dapper Reggie, no matter how small. “I would do little lighting tricks to keep them separate. We tried to shoot Ronnie from one side and Reggie from the other as much as we could. Not always the same side, but try and alternate them. Sometimes we filmed looking up at Ronnie, because he was more scary, and looking dead center or looking down at him slightly when it was Reggie. Ronnie suited an angle where you were looking up at him, he was more threatening, because he was so psychotic. He loomed. It was more scary if you were looking up at him.”

Pope asserts that even these small changes help viewers recognise the differences. “They’d pick it up subliminally.”

In one scene the twins throw themselves at each other in a furious fistfight, a scene which saw Hardy and Tomuri really hitting each other in order to sell the illusion. Even simple scenes could prove to be deceptively complex, like the moment when the capricious Ronnie attacks one of his own gang. “It seems simple,” said Pope, “it’s just a wide shot with the whole gang around a bar in a pub. That’s the sort of shot you would do in a normal film with two actors, one playing Reggie, one playing Ronnie, no problem. But it became very complicated to do.”

Beyond the transformation required of Hardy, there were a number of different elements just in that one shot that made it even more complicated. “There was cigar smoke being blown over Reggie, and the glass that was used to hit [actor David Thewlis] had to be a breakaway special effects glass that wouldn’t hurt but would just shatter over his head. In post-production that glass was changed to a real glass. So there’s all sorts of things going on.”

Even when only one of the twins is involved, some sequences presented more traditional technical problems. Pope highlights an extended steadicam sequence early in the film in which Reggie begins courting his soon-to-be wife Frances in a club he owns. The camera follows him from their cosy table when he moves away to take care of some nefarious business. “Brian, the director, thought it was really important to show Reggie dealing with Frances, how charming he was with her, looking after her, and without cutting at all, show a much crueller and violent side to him in the same shot.”

Moving the steadicam through a real location was “incredibly complicated,” said Pope. “It was in a real place, the Ivy House up in Nunhead, in South London. It was in the height of summer, there’s hundreds of people in there and it was absolutely sweltering,” Pope said. “I was on a desk with the gaffer and a desk operator, and we had a lighting board, and I think I did something like 26 lighting changes throughout that shot.

“I was sitting there watching it on a monitor and cueing the moves, because it was different every time — it couldn’t just be pre-programmed. I had to kind of orchestrate it like a conductor with the desk operator. And I was going ‘down on that one, up on this one’ and down one minute then up, and constantly playing with the lights to make it look consistent throughout.

“It’s a live performance. However many minutes that shot lasts, it’s live. 26 action cues for that one shot. And these were all things that are invisible to the viewer. You can’t really see them. It’s invisible.”

With all these technical challenges, you might not think there was much room to improvise or deviate from preparations. Pope insists the performances took priority over the technical considerations. “It was planned in advance, like on any film. You might storyboard the film. But when you see the actors doing it first thing in the morning in rehearsal you might well turn around and say, ‘Oh my God, our plan isn’t going to work. Right. We need to change the plan’.”

Pope asserts the role of the filmmakers is to support those performances with lighting and other elements. “That’s, in a way, the most exciting form of filmmaking. You bounce off what the actors are doing as opposed to vice versa. You see what they’re doing, and then you go into what they’re doing to make it the very best, emotionally, visually, sound-wise. It’s not about pretty pictures, it’s about getting the maximum emotion, drawing the essence of the scene, going right in there and getting the essence. Cutting out all the crap and garbage you don’t want. Going right in for the kill, in terms of the emotion. That’s what’s important. I would say that’s what separates great storytelling from mediocre.”

“Legend” is available on DVD, Blu-ray and video on demand now.