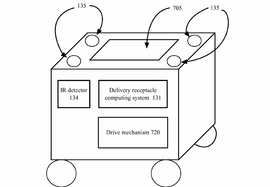 Drones could soon be delivering packages to your doorstep, but what about thieves?

Google may have a solution.

The company was granted a patent Tuesday for a “delivery receptacle” designed to accept packages from drones and then move them to a secure location such as a garage.

It’s the latest development in the burgeoning field of drone use, with retailers such as Amazon and Walmart angling to use the tech for deliveries. Mountain View, California-based Google announced its drone delivery project back in 2014, dubbing it “Project Wing.” In November, Google said it could start delivering packages by 2017. Such plans are on hold, though, until the US Federal Aviation Authority lays down rules governing commercial drone use.

The increased interest in drone deliveries underscores growing expectations for how quickly purchases should arrive. Some already taking less than an hour, but delivery drones could supposedly shave off even more precious minutes.

Ensuring that parcels are delivered securely is another drone-related challenge that tech and regulatory brains will seek to solve in the coming years. Google’s new patent covers a system that uses infrared beacons on the receptacle to connect with a drone in flight and guide it to the delivery spot.

As with many patents, the idea could come to nothing but offers a glimpse at what Google is working on.

Google did not immediately respond to a request for comment.