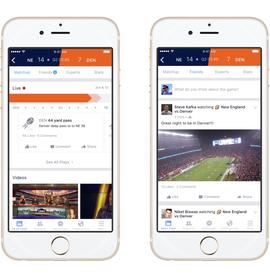 If imitation is the sincerest form of flattery, Twitter should be glowing with pride.

It should be, but perhaps the company is nervous instead. That’s because the imitator is Facebook, Twitter’s biggest rival in the war for your social-media attention.

Facebook on Wednesday announced a new feature to help the more than 1 billion people who use its service every day follow sports games live. You can track the game with friends, and the feature encourages you to discuss stats, plays and everything else from anywhere around the globe. It’s called Sports Stadium, and it arrives just in time for Super Bowl 50, set for February 7.

The perennial second-banana to Facebook, Twitter is a darling of the tech and media worlds, but one that’s struggled to meaningfully expand its social-networking site. It’s about a fifth the size of Facebook in terms of people who use it regularly. Now one of Twitter’s most promising features, people talking about sports in real time, may be undercut by Facebook’s Sports Stadium.

Whenever there’s a big event, Twitter lights up with commentary, links and photos from people watching in real time. Twitter has at times helped to encourage this by creating quick links people can tap on to find the conversation. Or it’ll highlight tweets through its Moments news feature or company-run account, @TwitterSports, which is followed by more than 12 million people. Sports fan are, well, fanatics, and the thinking is that people who care about sports are more likely to want to talk, or tweet, about them.

A good move on Twitter’s part, but now Facebook has shown that anything Twitter can do, it can do too. The question is, can Facebook do it better? Or does that even matter?

Let’s face it: If we had to declare a winner in the war for social-networking supremacy, it’d be Facebook. More than half the world’s online population is using the service. It’s already the world’s top place to post photos, and plenty of people are sharing political opinions there ahead of the US presidential election. More and more people are also checking in during disasters and terrorist attacks to let friends know they’re safe.

Anything you can do, I can do better

As new projects like Internet-beaming drones get off the ground to bring even more people online, Facebook has pounced on them to make sure most of us communicate with our friends and family using its service. The trick now is to get you and me to use Facebook even more than we already do.

Can sports be the next big thing? Well, Twitter users think so. And now Facebook and its CEO, Mark Zuckerberg, do too. What’s unknown is whether sports broadcasters and fans will follow suit.

You may look at all of this and think Facebook is just nicking a competitor’s idea. But that’s what rivals do — steal each other’s best ideas. Apple co-founder Steve Jobs in 1996 famously repeated a quote he attributed to Picasso, “Good artists copy; great artists steal.” Jobs then added, “we have always been shameless about stealing great ideas.” For years, some software developers would watch Apple events with some trepidation, fearful the computer maker would build their ideas into its software, give it away for free and put them out of business. They weren’t being irrational, as You Control: Desktops, Quicksilver and Menuet can attest. (Never heard of them? That’s the point.)

Though Zuckerberg has talked much about his opinions around borrowing ideas, a Facebook spokesman declined to make him available for comment for this story. A look at Facebook’s initiatives over the past year, however, shows that sports isn’t the first idea Facebook has borrowed from some of its social-media rivals. The company also added popular ideas like trending topics (another key part of Twitter), ephemeral messaging (a hit from Snapchat) and location services (made popular by Foursquare).

Just because a company creates a smart new idea doesn’t mean it can’t be improved on and made even more popular, said Brian Blau, an analyst at Gartner. “Ideas are a dime a dozen; execution isn’t.”

So maybe the question isn’t whether Facebook stole from Twitter. Instead it’s, what app will you be swiping through during the Super Bowl?