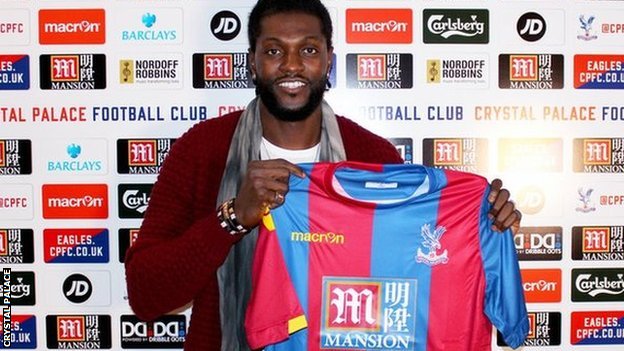 Emmanuel Adebayor is back in British football, just when it seemed he had waved goodbye to the country that had been his footballing home for 10 years – aside for one short loan spell with Real Madrid.

The 31-year-old has joined Crystal Palace on a free transfer following his release by Tottenham five months ago, with his last appearance coming for Spurs on 3 May 2015.

"He loves football so he played every day, every week with friends, ex-professionals, current professionals and players based in Europe who returned for a holiday," said Togo head coach Tom Saintfiet.

"He played with his friends here, local football, street football. They played matches here in the country purely for the love of football and to stay fit.

"These were football pitches without much grass, a little bit bumpy. I saw some of the matches sitting on a chair under a tree, with a few hundred spectators enjoying the skills." "Also in these matches he tried to push himself to the limit by not just playing as the top striker," added Saintfiet.

"He played more as a midfield player because then he has more work to do and more touches on the ball."

"For a year now in Togo we haven't had a domestic league," explained Togo-based football journalist Steven Lavon. "As Emmanuel Adebayor was here a lot of them came and played football with him.

"And also we had some old internationals that played in the matches with him like Adekambi Olufade, who used to play for Lille and Nice, and Lantame Ouadja, who played in the top flight in Switzerland.

"Ex-international players that are in the capital Lome, they always turn up to play with Adebayor on the street or at the national stadium where they have played sometimes."

Sessions with a personal trainer

"I saw him a few times here when he was training by himself to stay 'top fit'," said Saintfiet. "He had his personal trainer and all the materials to train on a daily basis very hard.

"He has not one gram of extra fat. His fat percentage is that of a top athlete. He did everything by himself to stay fit and be ready for his chance to return to the top level."

Lavon added: "He's been working two times a day with his personal trainer. In the morning and the afternoon, about two to three hours per session at his house where he had all the materials he needed to do his personal training."

So he’s very motivated to play for Palace?

"I think there are not many players at this moment who are more hungry to prove something than him," said Saintfiet.

"He had offers from Turkey, from China, from the Emirates, where he could earn his money much easier and have an easier life. But he really has a goal to prove to himself in the Premier League."

"That's the biggest drive of all I think," said Saintfiet.

"I'm sure he can score goals and I don't think he will stop before he reaches that record of Drogba so I think he will go for that."