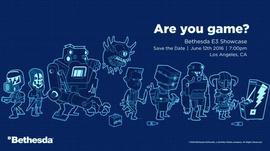 It may still be winter, but Fallout publisher Bethesda has now started to announce its plans for E3 2016, one of the year’s premiere video game shows. The Maryland-based company on Monday announced that its E3 briefing will be held Sunday, June 12, starting at 7 p.m. PST / 10 p.m. EST.

Bethesda’s briefing at E3 2015 represented the company’s first-ever presentation at the annual show. During the event, Bethesda showcased Fallout 4, Doom, Dishonored 2, and other games.

Bethesda didn’t say what it plans to show at its E3 2016 briefing. The image above contains references to the Fallout and Elder Scrolls franchises, among others.

Bethesda’s first-ever E3 briefing last year was also held on Sunday evening, which, before Bethesda came along, did not including any briefings. This year, however, there will be at least two on Sunday, as Electronic Arts is planning its first-ever EA Play event for Sunday afternoon.

What are you hoping to see from Bethesda at E3 this year? Let us know in the comments below!